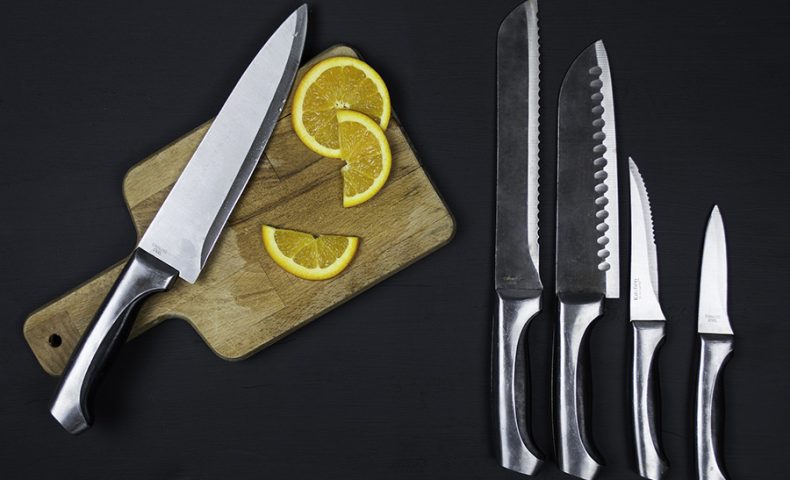 A Chef’s knife is the most important tool in any kitchen, and for professional chefs, it’s important to have a set of knives that they can rely on so they can make the right cuts to produce beautifully presented and tasty dishes. For chefs, a knife’s level of sharpness is the most important feature, which is why the bevel – or angle of a knife – is important. The bevel will determine how durable, sharp, and efficient a knife is.

What are Knife Bevels?

A knife’s bevel refers to the surface that has been ground to form the knife’s edge. You’ll see on a knife that there’s a slight angle on one side or both sides that runs down to the edge – this is the bevel. Knives with an angle on one side of the knife are called single bevel knives, while knives with angles on either side are called double bevel knives. The bevel can be ground for all sorts of different angles. Generally speaking, the smaller the angle, the sharper the knife.

Difference Between a bevel and an edge

What is the difference between a single and double bevel knife?

The difference is straightforward:

European knives are mostly double-beveled and come in a variety of different edge styles, with the most common being a V-shape. Other edge styles such as convex-shaped are also available. On the other hand, Japanese knives are usually single-beveled. On a Japanese knife, one side of the blade is completely straight while the other side contains the angle that forms the edge. These knives are sometimes referred to as chisel edge, and an example of a Japanese knife is the Santoku Genten.

Single bevel knives are favored when preparing Japanese food as they’re known for being extremely sharp. The sharpness is due to the fact that the knives only need to be honed on one side of the blade so it’s much easier to create a sharper angle. The extra sharpness allows for precision dicing, slicing, and cutting which is essential in Japanese cuisine, especially when preparing seafood dishes such as sashimi.
Single-beveled knives also allows for making long, unbroken, wafer-life cuts which is important when preparing Japanese vegetables such as daikon. These types of cuts are difficult to do with double-beveled knives.

What angle do you sharpen a single bevel knife?

Single bevel knives are be sharpened between 15 to 17 degrees. This creates a very sharp edge, which is essential for delicate cutting involving seafood, fish, meat, and vegetables. These knives require less effort to sharpen because there is only one level, however they are very delicate, and it does take time and practice to master the correct sharpening technique.

Double-beveled knives, such as the Santoku Ganjo, has many uses as well. They can be used for a wide variety of cooking preparation tasks that don’t require precision work such as cutting fish for sashimi or Sushi, or peeling long pieces of thin vegetables.

What angle do you sharpen a double bevel knife?

Double-beveled knives can be sharpened between 20 to 30 degrees on each side. If the knife is used for cutting or chopping dense meats and vegetables, then the knife can be sharpened to higher angles (i.e. 30 degrees). For sharpening, it’s recommended to use a whetstone and also make sure the same angle is created on each side of the bevel.
These are just a few of the key differences to consider when it comes to the differences between single and double-beveled knives. Cutting with single bevel knives requires more practice, but when you become comfortable with it, it enables you to produce thinner, superior slices to create aesthetically pleasing dishes. 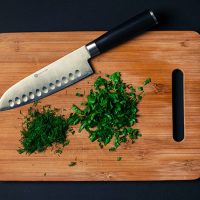 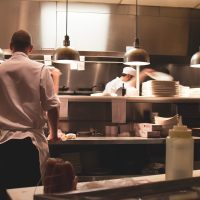 Chefs and their Knives